Kiev is one of the oldest cities in the Eastern Europe – 1500 years to be precise. It has not only plenty of historical monuments such as the Golden Gates 11th century fortress, but also lots of museums and galleries. Nowadays Kiev attracts many people with its impressive cultural life as well. The city is buzzing with its fashion weeks, musical festivals, exhibitions and street parties. We sent one of our contributors, Irina Belan, to the exhibition and performance “Art in the City” at the gallery Shadows and Shades (Тіні та Відтінки), to soak in some Ukrainian art and write about it. Here is her recount. 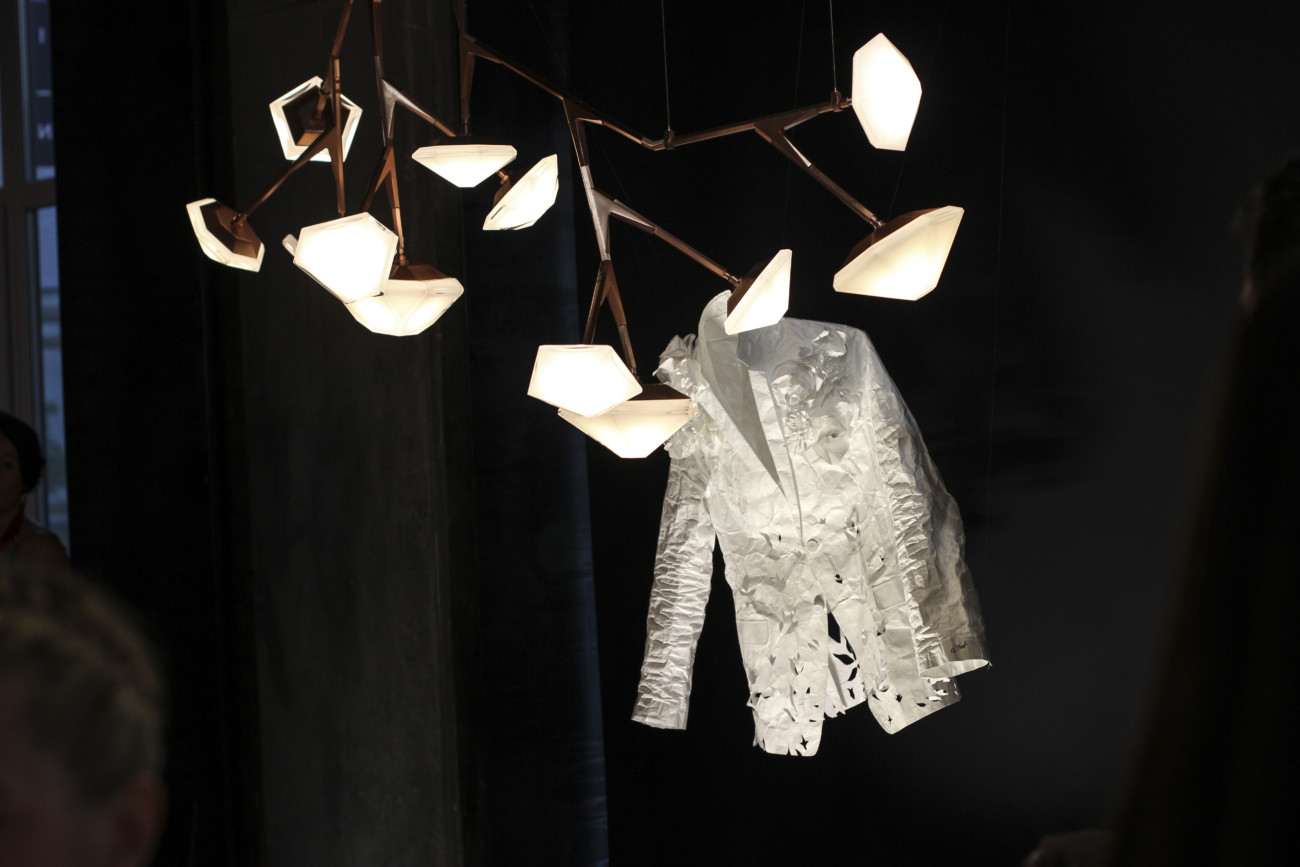 Art in the City gathered fashion, art and design fans. The gallery is a multifunctional zone where lighting sculptures of American garage designers such as Jason Miller, Lindsey Adelman, Bec Brittain, Davis Weeks are presented. The exhibition Art in the City tried to show different manifestations of art in the modern metropolis. Art has already left the spaces of the traditional galleries and museums and has merged into the street fashion, murals, sculptures and graphic design. 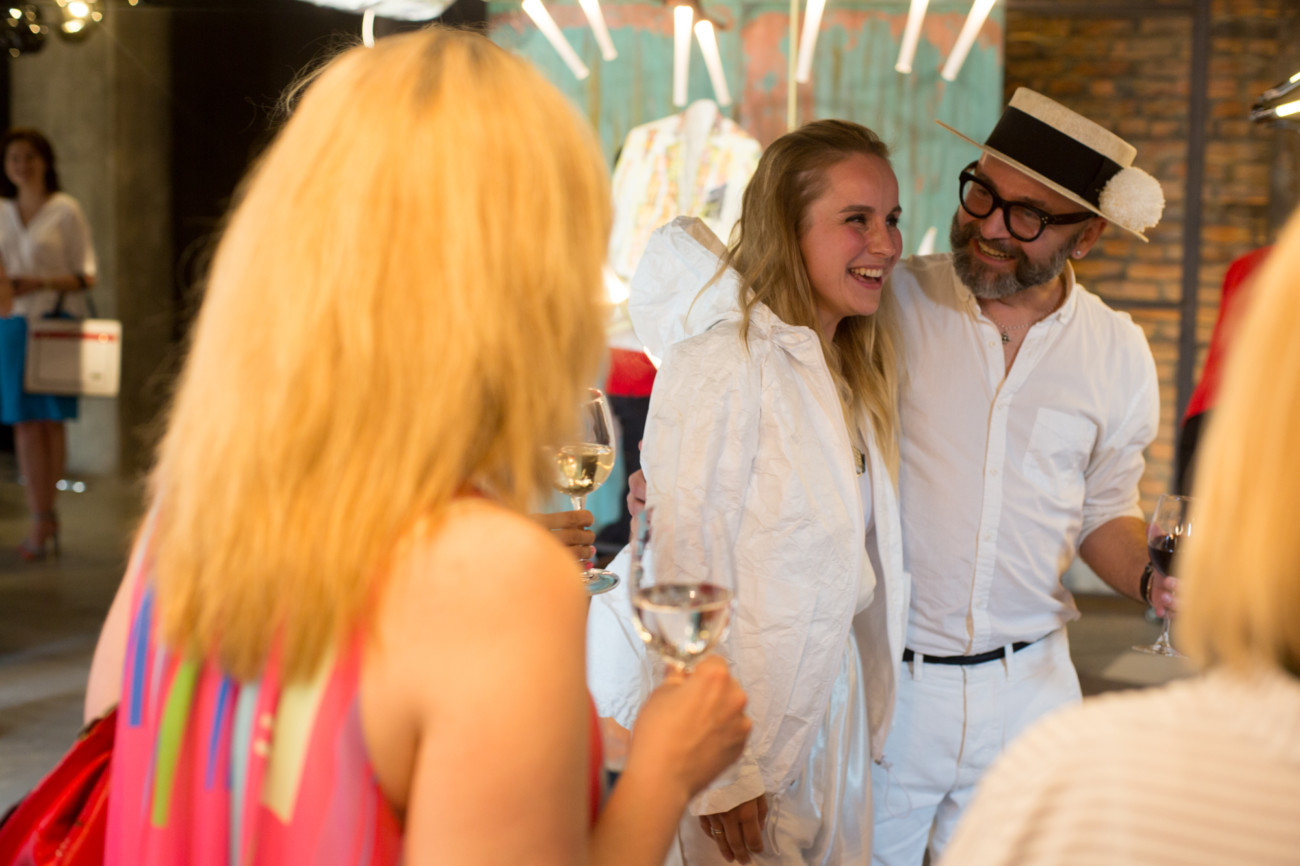 Four local artists painted four Tuvek (flashspun high-density polyethylene fibers textile)  jackets by the Ukrainian fashion designer Serge Smolin. Vjacheslav Malina, Viktor Deysun, Michailo Deyak and Serge Payet had already painted the jackets in advance. We also witnessed a performance of three Ukrainian artists who transformed the surface of the new  white jackets. Olesia Dvorak-Galik, Anna Mironova, Valentina Zasutskaya presented their ideas about the connection between art and fashion, and their place in the life of the inhabitants of the metropolis. 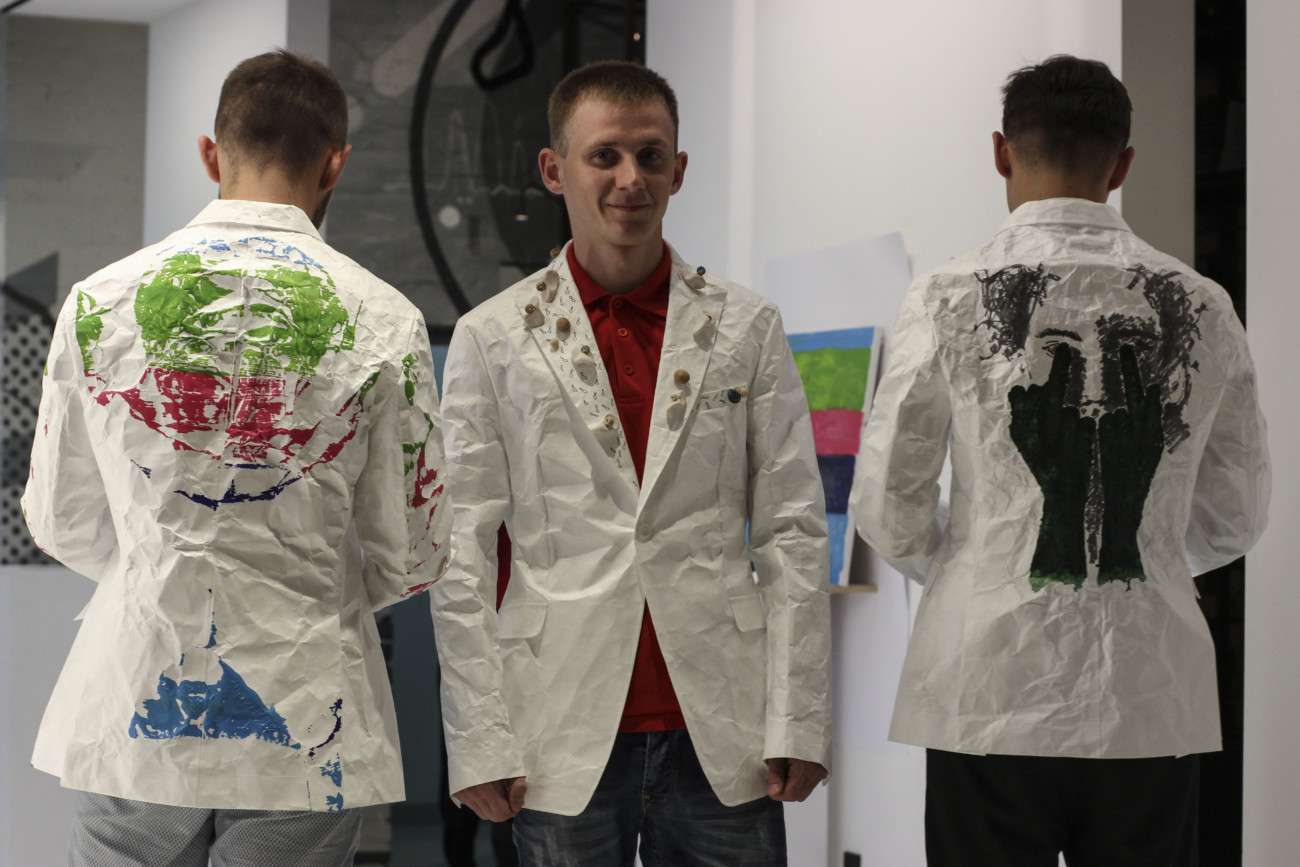 Olesia Dvorak-Galik used ceramic pots to transform the jacket. She says that this way she wants to inspire people not to be shallow but to live a deep, multi-dimensional life. 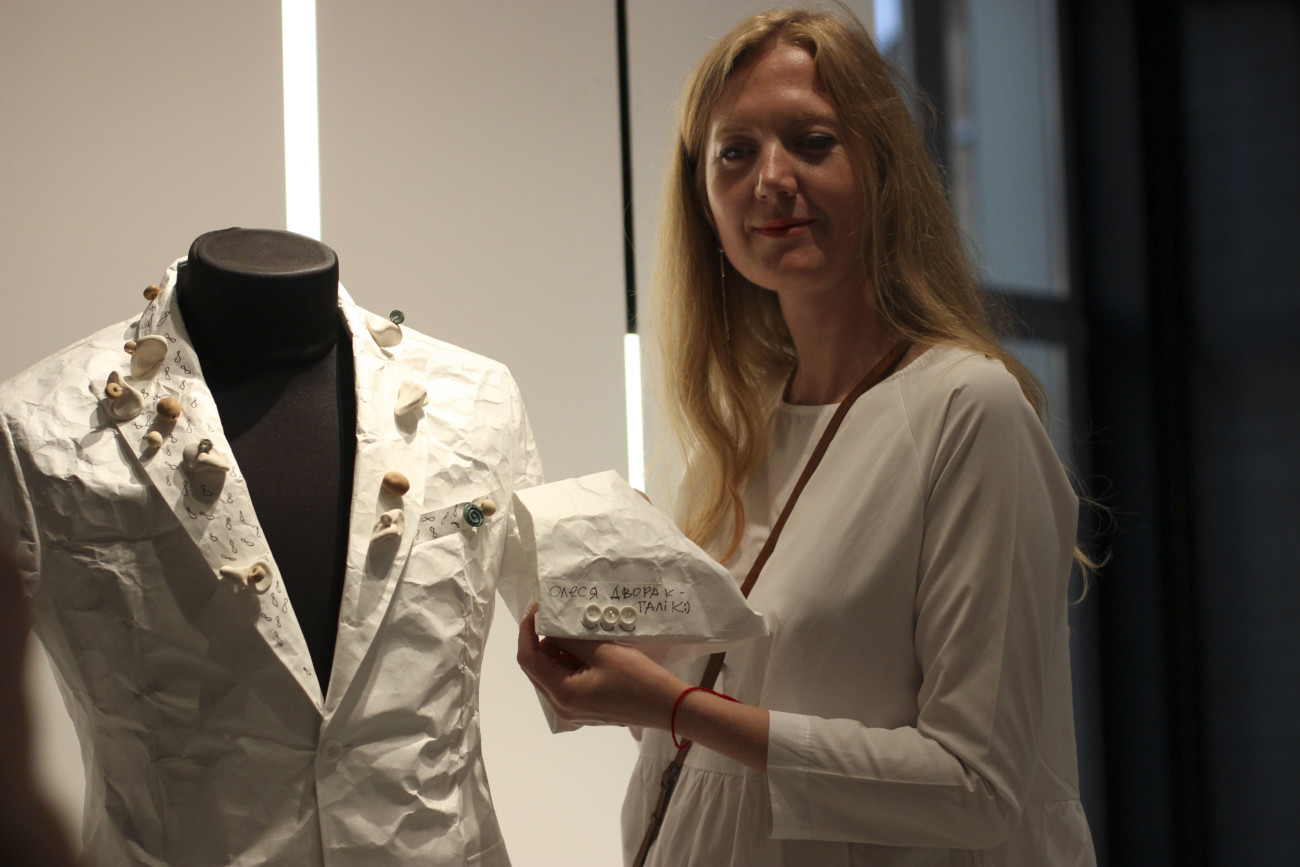 She says that some people nowadays prefer living an empty, flat life. The ceramic elements give the jacket a volume. They manifest the full spectrum of emotions, interests, desires and way of life.

Valentina Zasutskaya used stencils. She says it is her way to fight with the greyness of the everyday life, dull streets and buildings. 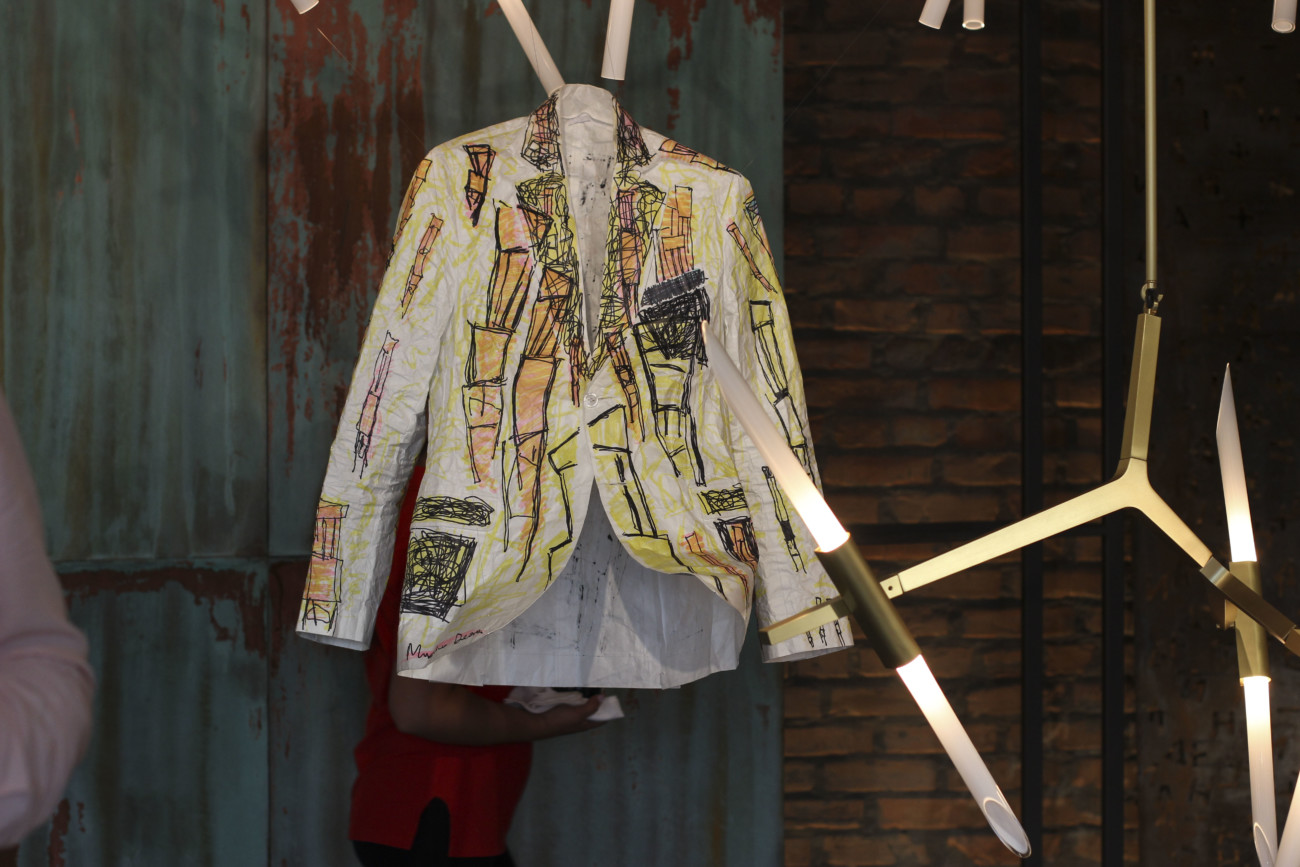 Anna Mironova created a painting during the performance which was printed on the back of the jacket.

Sometimes art people are very absent minded. They lean on a freshly painted wall while deeply involved in their thoughts without even noticing. I think it is funny and wanted to show it. 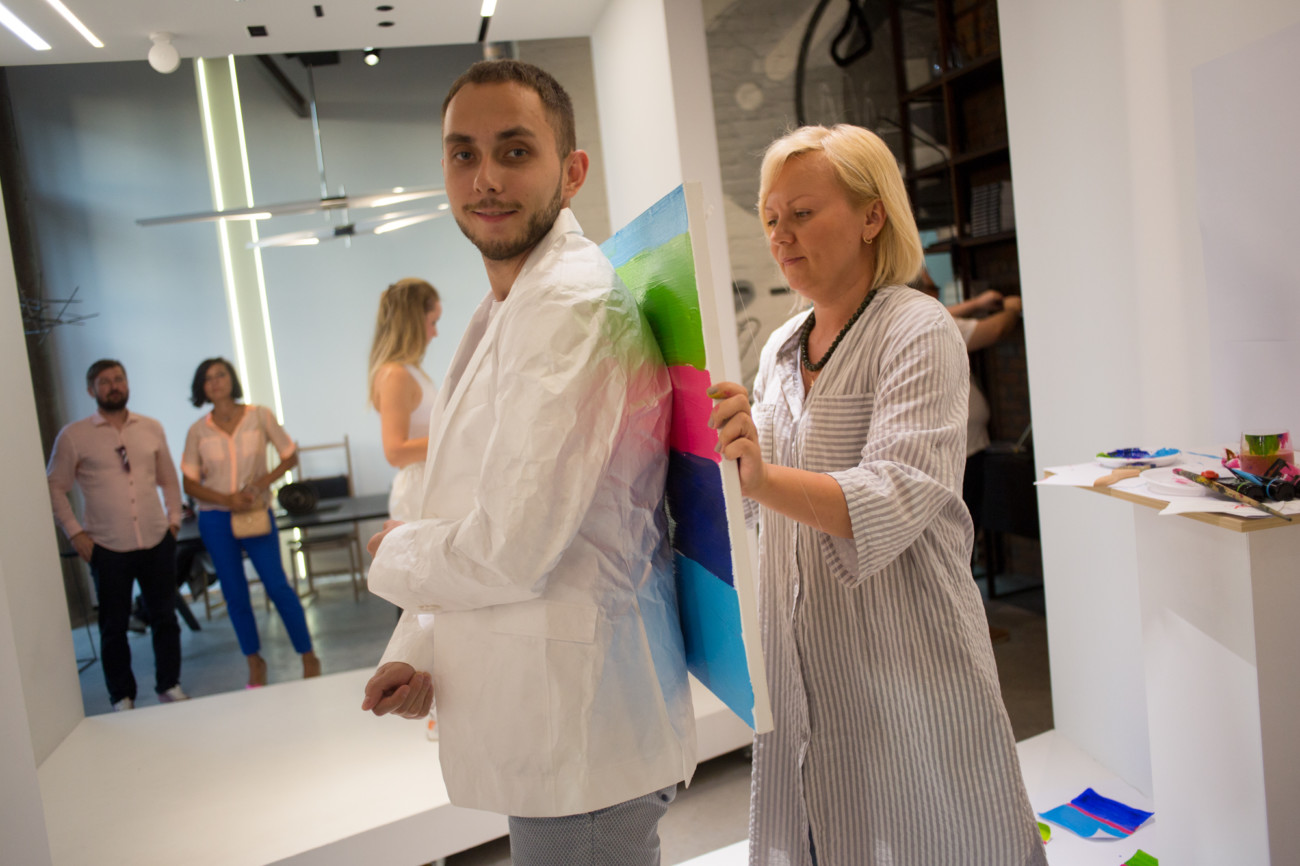 The works created during the performance will be sold during a following auction. All the proceeds will be used to help disabled kids in Ukraine.