I am sitting in my bikini in the kitchen as I am writing this. The balcony door is open, the sun is shining, the garden is in full bloom – small carnations, roses, daisies, birds singing, butterflies fluttering around. I am totally loving it!

Summer in Sweden is unbeatable when it is warm! My theory is that end of May and all of June can be amazing in Sweden exactly because everything is in bloom! It inspires me to go exploring the hidden gems of the Stockholm archipelago – for a day or two, or three. 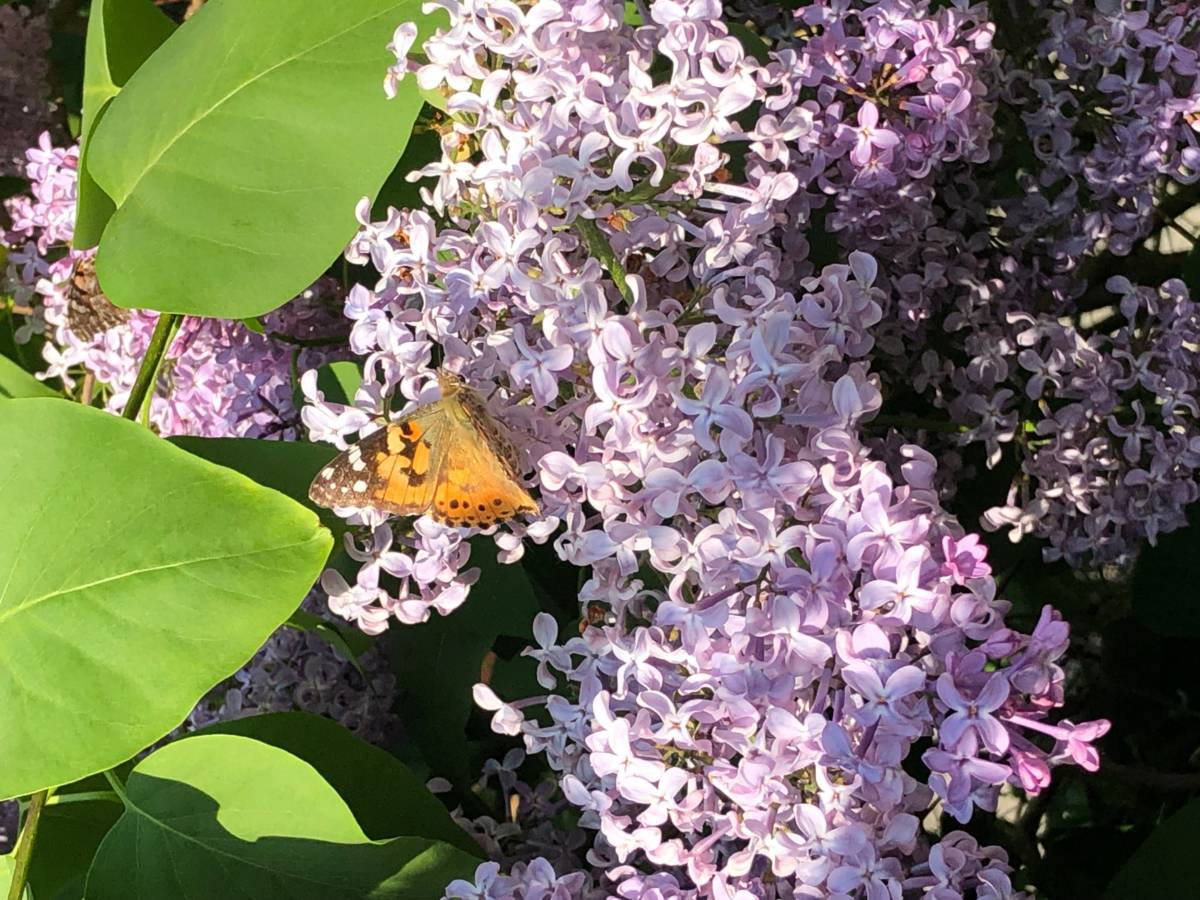 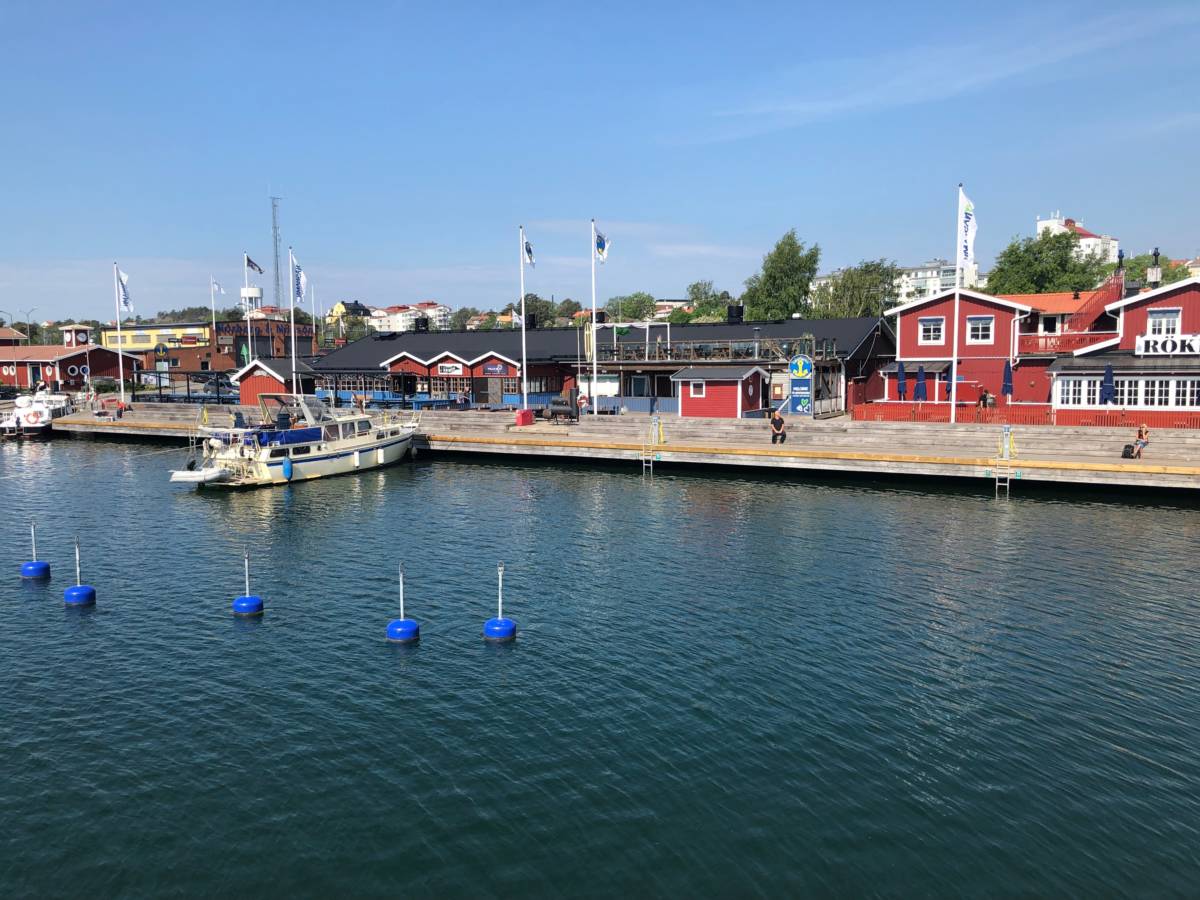 One of those gems is a small island  called Nåttarö. You take a train to Nynäshamn from Stockholm for 30 min, then a boat for another 30 min and you are there! I decided my family and I could spend one night in Nynäshamn and one night on the island. The best feature of Nynäshamn is Nynäs havsbad hotel or their spa to be more precise.

You can enjoy looking over the cliffs at the open sea, the lighthouse, soaking in the jacuzzi or just jumping in the water. All that with a glass of bubbly at sunset of course!

Quite an amazing luxury with a view! 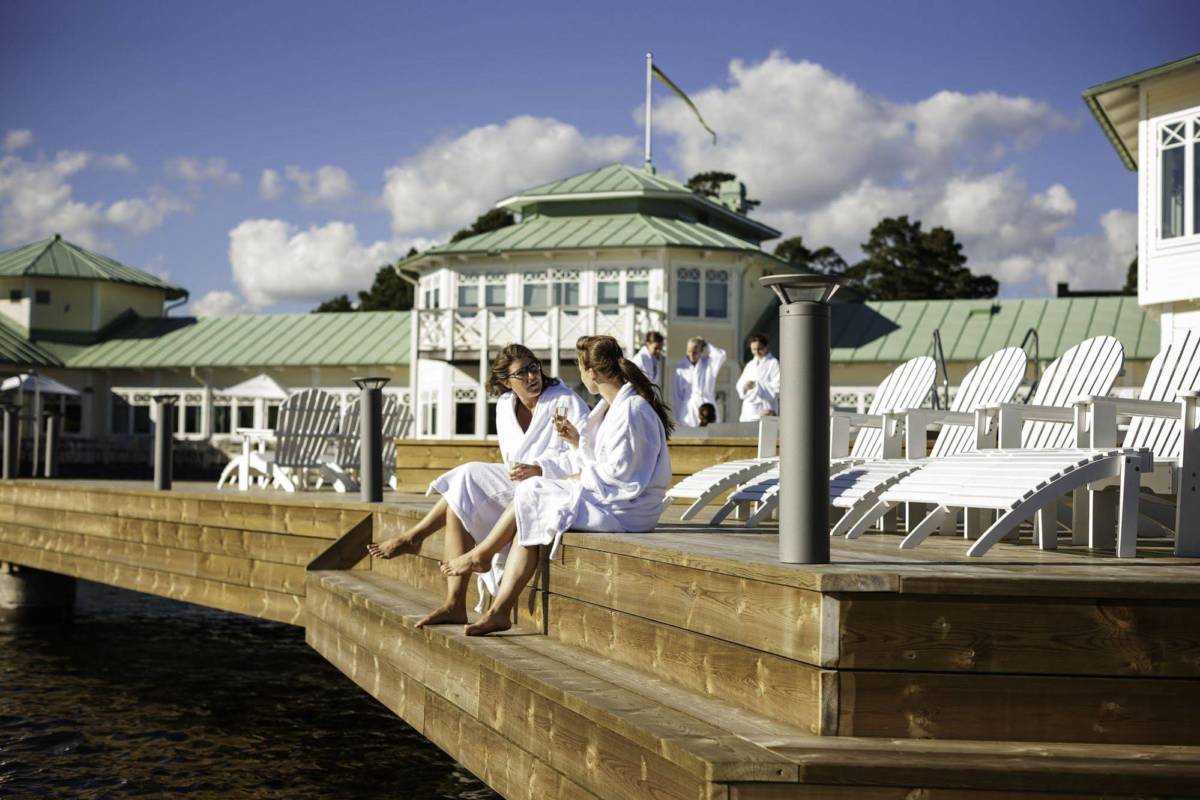 The boat to Nättarö at 10 am was full of teenagers going for a summer camp. Some loud music is allowed.

The wind messes around my hair but I am happy to watch the waves on the sea, the little rocks and houses as we glide by.

The boat stops at two places on Nättarö, we jump off at the first one. 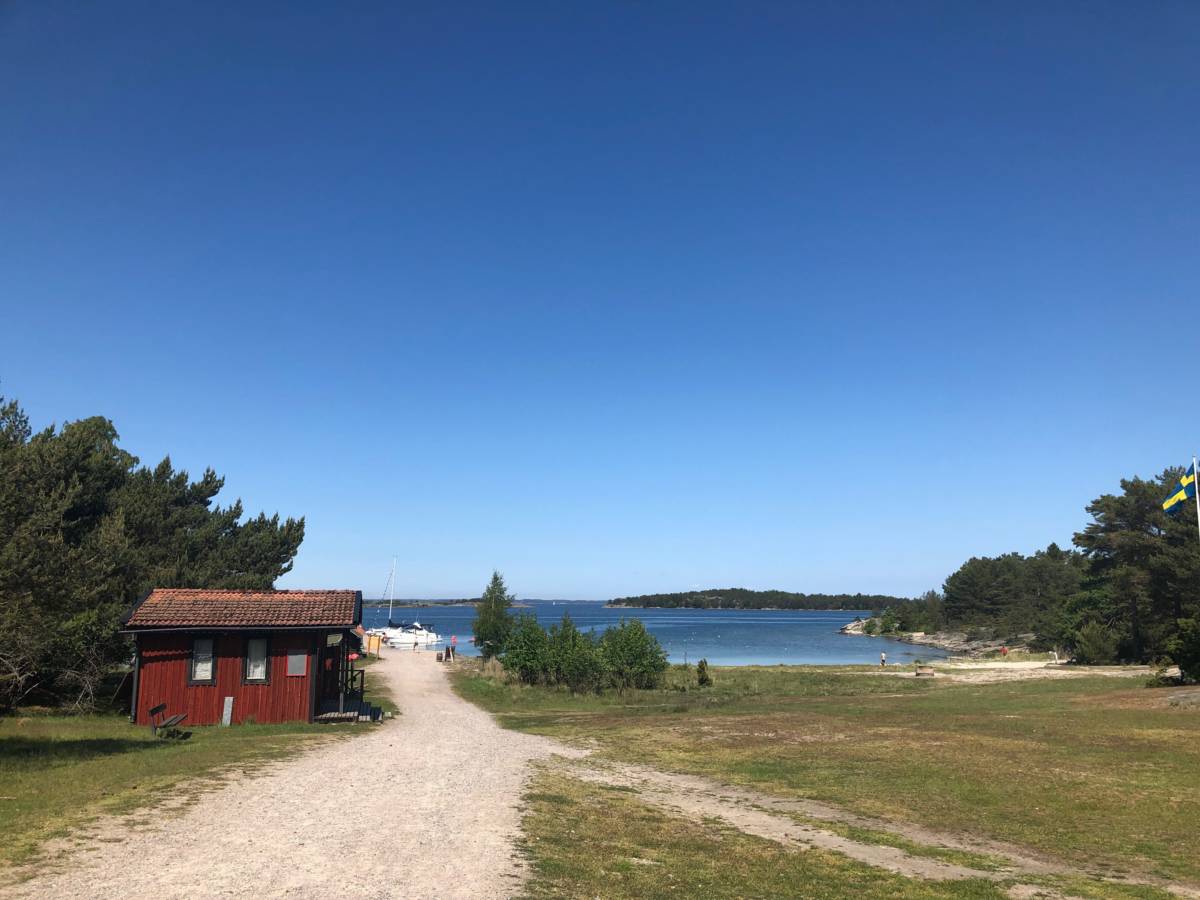 I have booked a stuga for oss – a type of a bungalow, but it is too early to check in so we leave our luggage at the reception and rent bikes. I love exploring! We bike to one of the beaches first – Storsand, but not very fond of the algies there. So we bike to the next beach – Östermar.

We put our towels down on the clean fine sand and proceed to watch the boats coming in, sailing proudly against the deep blue of the sky and the sea.

I take out my journal and start sketching. My daughter gets a paper and some pencils to draw as well. It feels like such a perfect idyllic summer day in the southern archipelago! 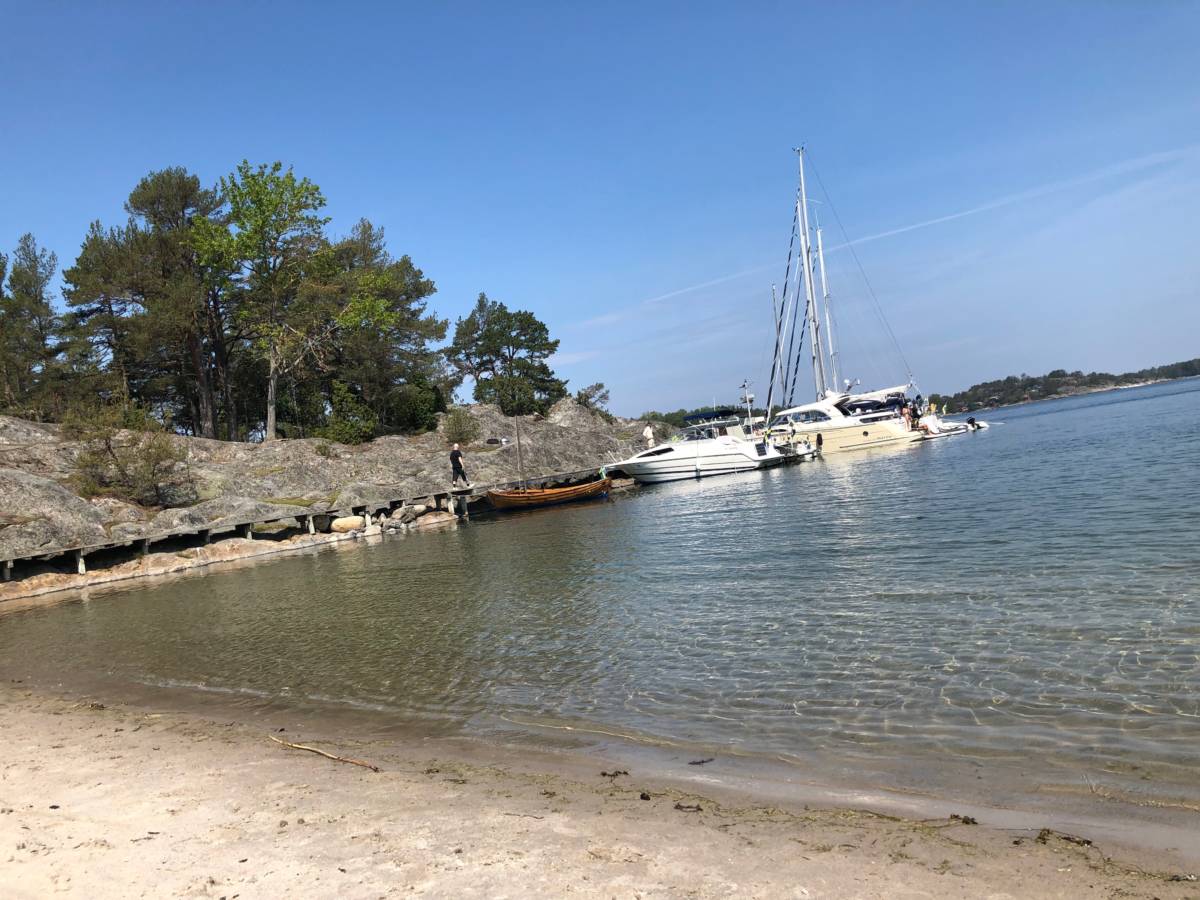 After some lunch on the beach we ride the bikes to the Queen’s cave. Not much of a cave for my standards, just an opening in the rocks. It was named after Queen Maria Eleonora (1599 – 1655). After the death of her husband Gustav II Adolf, the German born queen had difficult years of mourning and fighting with the Swedish Council of the Realms. She decided to go to Prussia via Denmark on 22 July 1640, a trip that was opposed by the council.

During her journey the queen sought shelter in the cave on Nåttarö while waiting for better sailing conditions. She is said to have carried her dead husband’s heart in a golden box around her neck. Legend has it that she buried the heart in the sand outside the entrance of the cave. 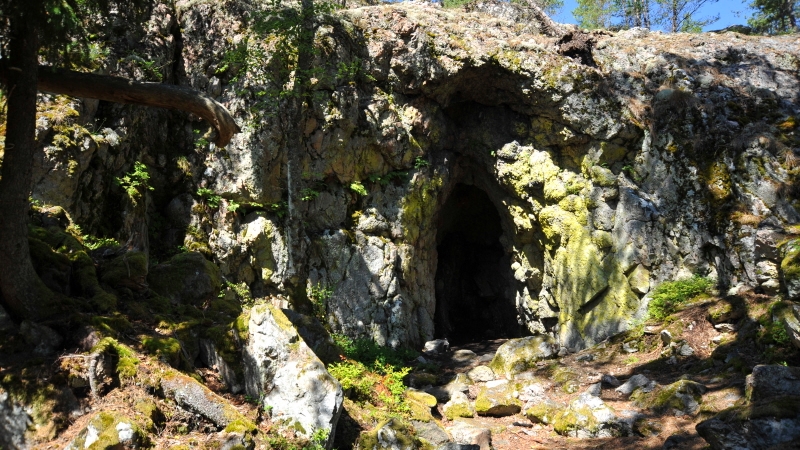 We checked in into our stuga, which was lovely even though it had no running water or toilet inside. But common ones outside, just beneath the pine trees! My husband decided to take a nap, my daughter was busy with her games so I went to the cliffs by the sea to soak in some sun.

The evening found all of us sitting on the terrace of the restaurant, overlooking the sea with a bottle of bubbly and fish dishes, including a lovely Wallenbergare – a fish burger served with mashed potatoes. What more can you ask for?

The other customers at the restaurant were families, sailing boats people, the occasional English tourists who somehow found their way there. I ran out to take some sunset pictures at around 8 pm which charged me with so much calm and positivity! 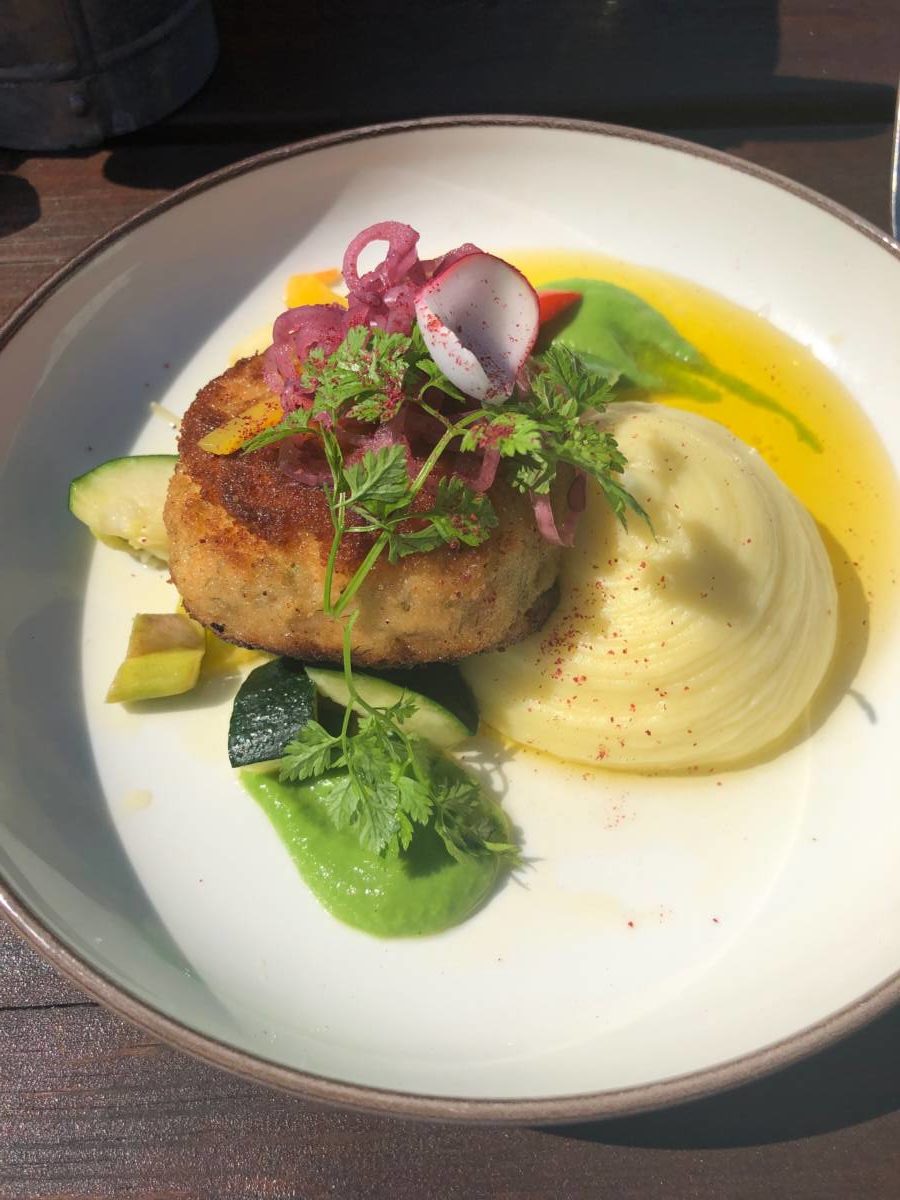 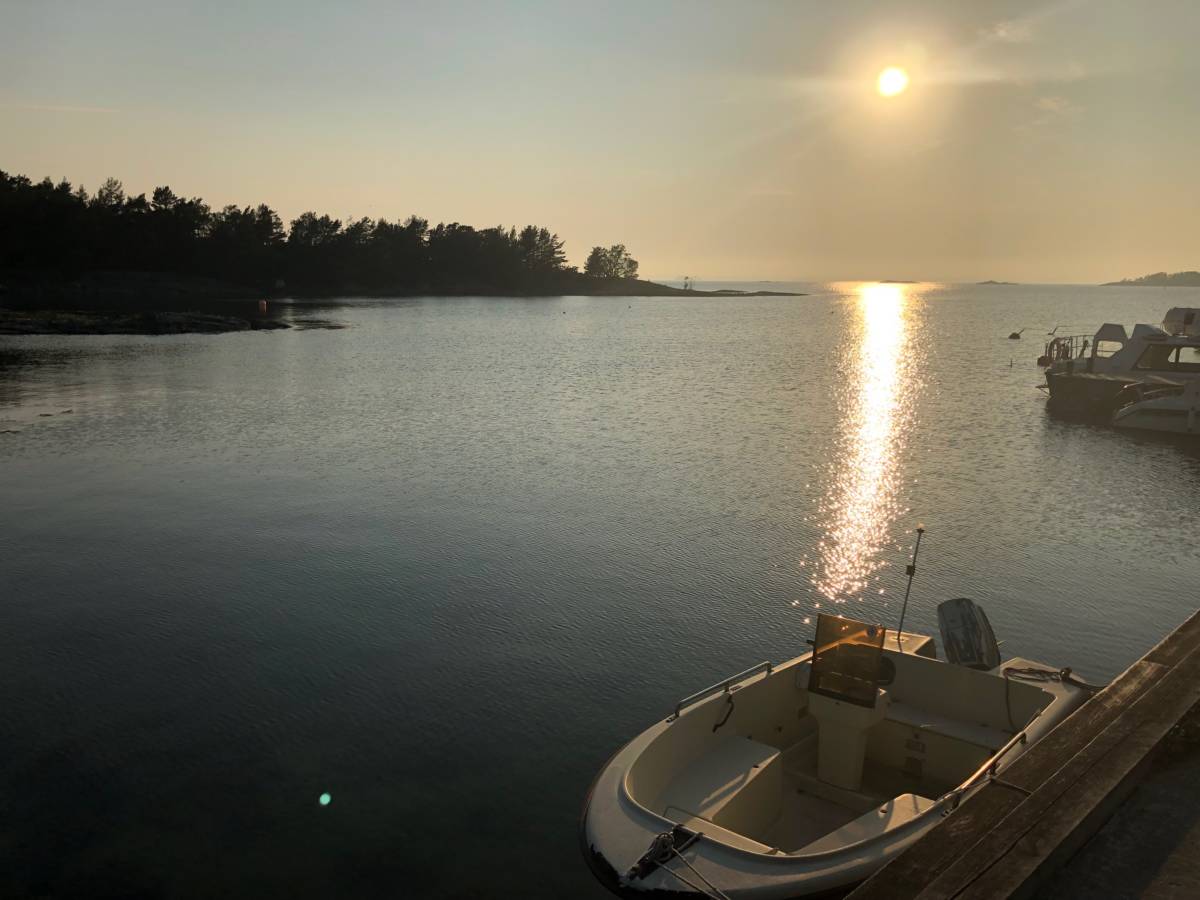 The next morning brought more sun and fresh air. I went out to the common tap with running water to brush my teeth. As I was brushing,

I looked around at the pine trees, the little houses and thought  – this must be the most romantic place I have ever brushed my teeth at!

A true rival of brushing your teeth up 2000 meters in the majestic mountains of Bulgaria! Breakfast, cleaning the stuga, check out and back on the bikes, all the way through the pine woods to the most southern point of the island! We did not see any deers but quite possible, as they were introduced to the island and nature protectorate in the 60s. 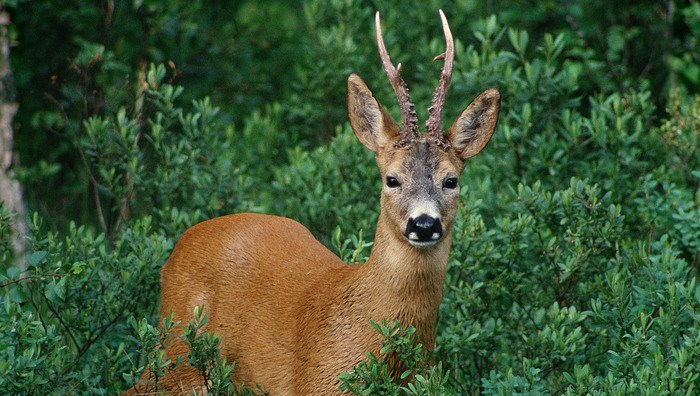 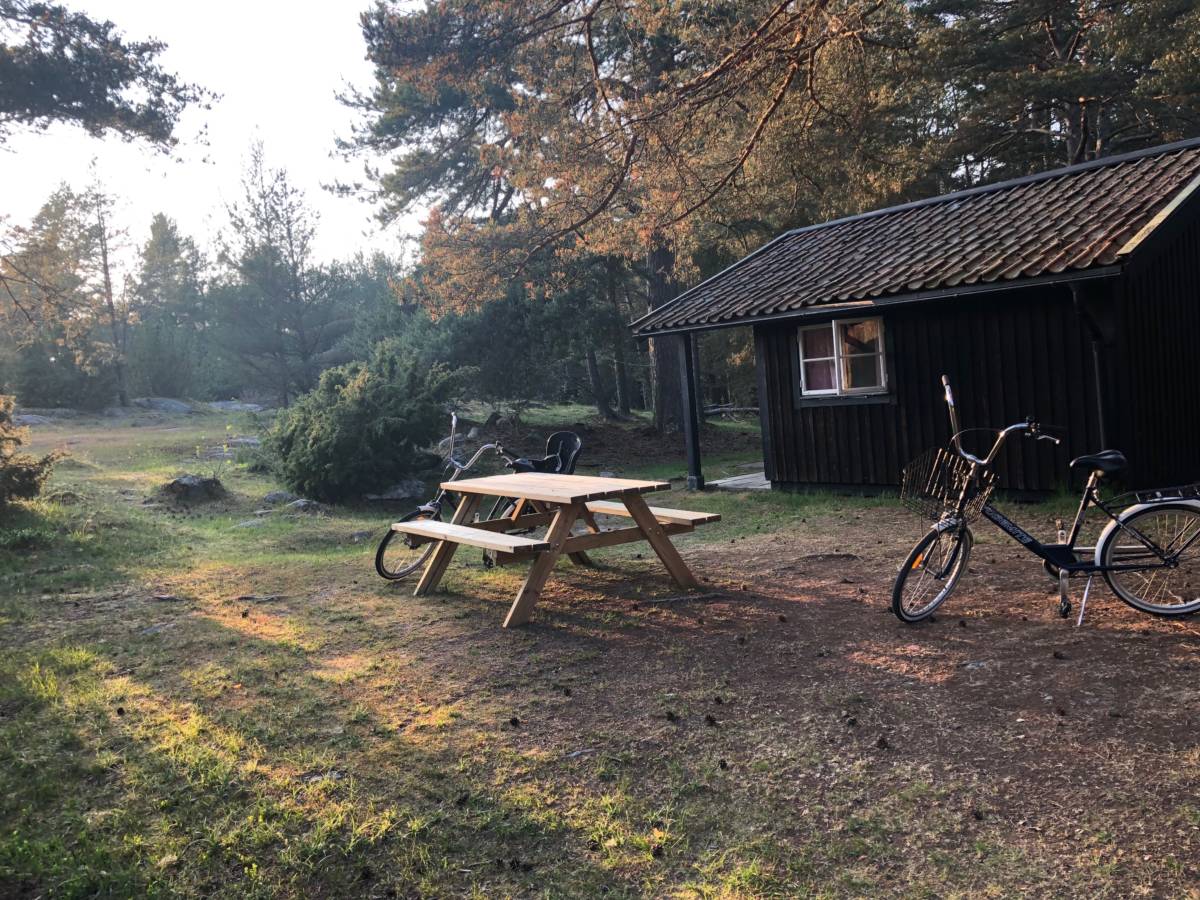 When we arrived to the beach we saw an elderly couple camping there. They greeted us and went about their business. We climbed around the cliffs for a lovely view. Sat down there for a bit, listening to the waves and watching the big boats coming by from Gotland.

The daisies growing in the cracks of the rocks swayed with the wind. Polen from the trees had covered the road to the end and looked like snow. Sometimes life is only that – observing and enjoying the beauty of nature around you! 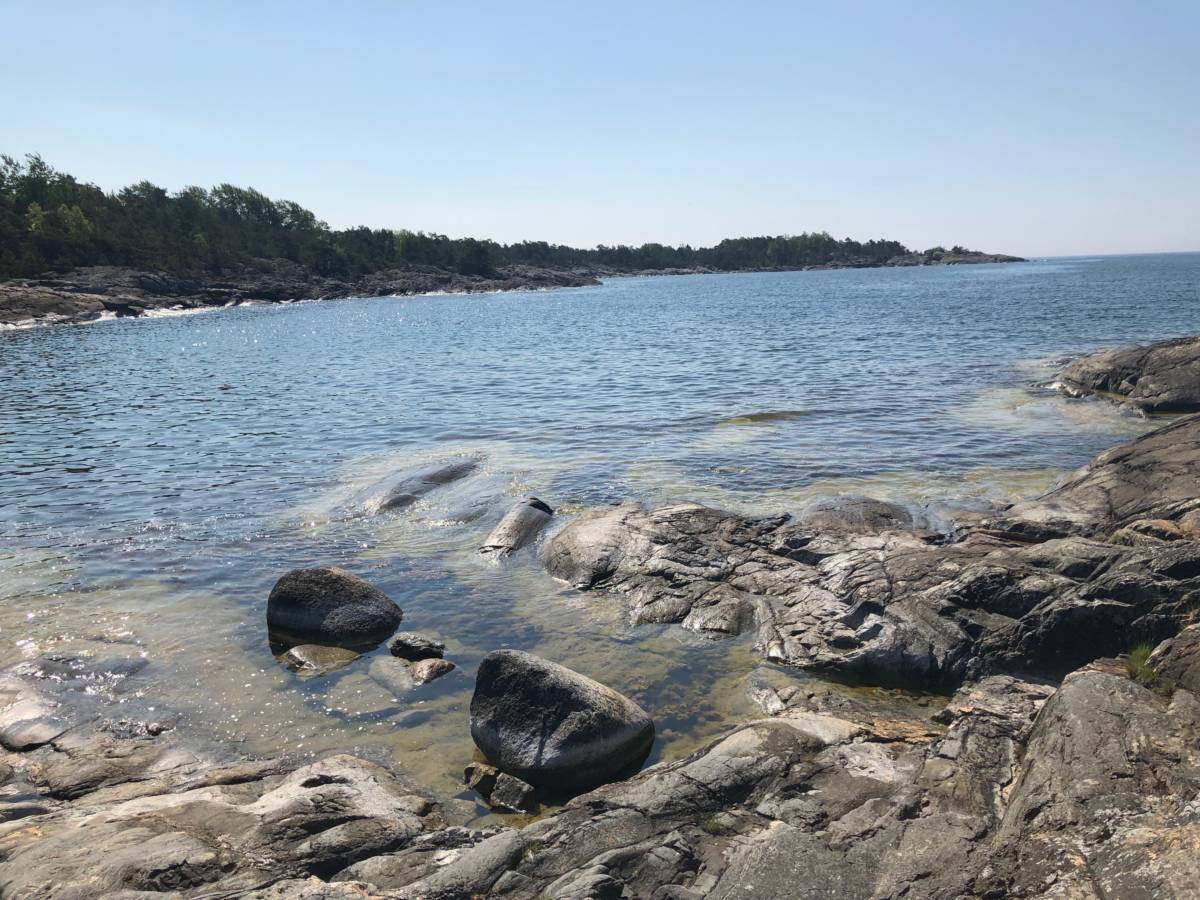 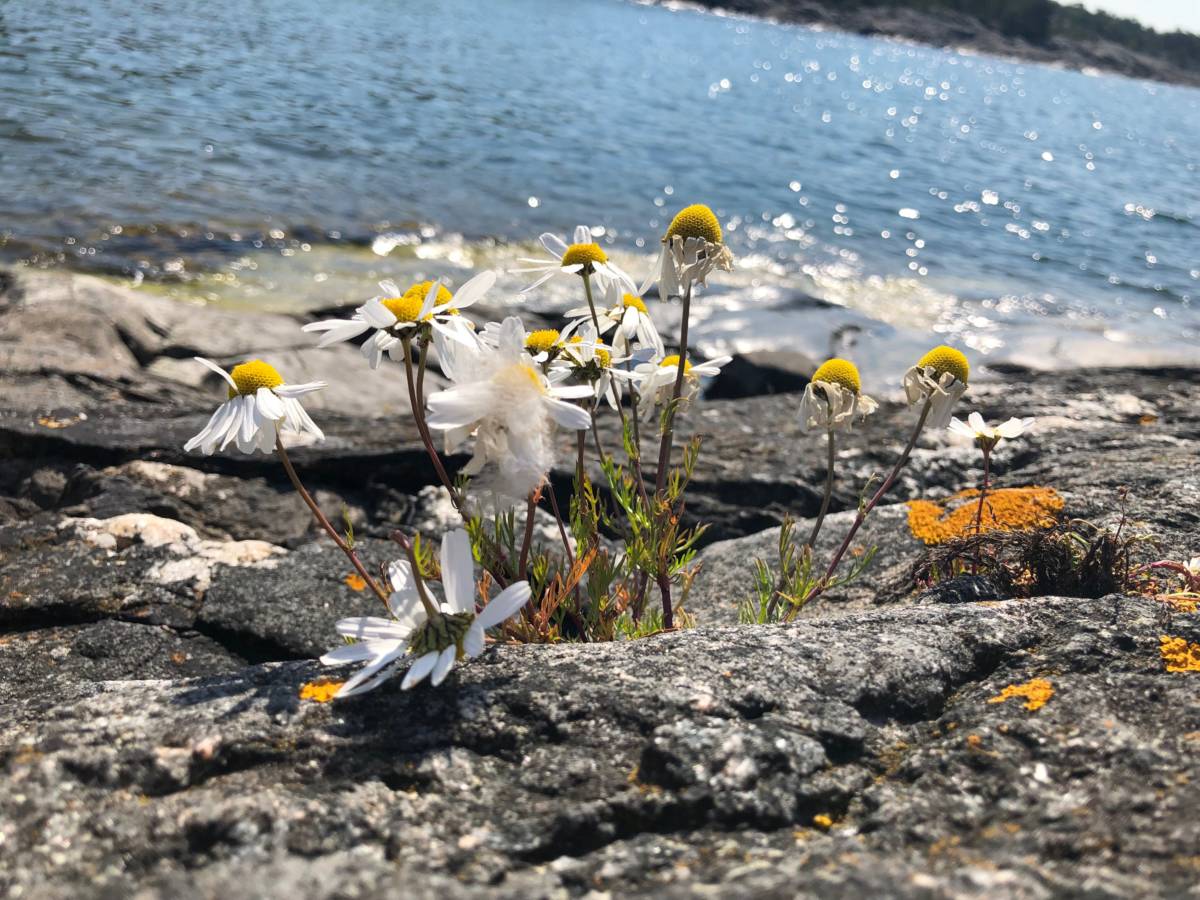 After the break we biked to Vänsvik, then back to the reception to leave the bikes. Lunch in the restaurant and then beach until it was time for the boat back at 4 pm. A group of Spanish speaking people were having a bbq and playing some music. I even jumped into the cold water for 10 seconds, tjuhooo!

FYI, the water was probably 10 degrees Celsius. Air was about 30 degrees. 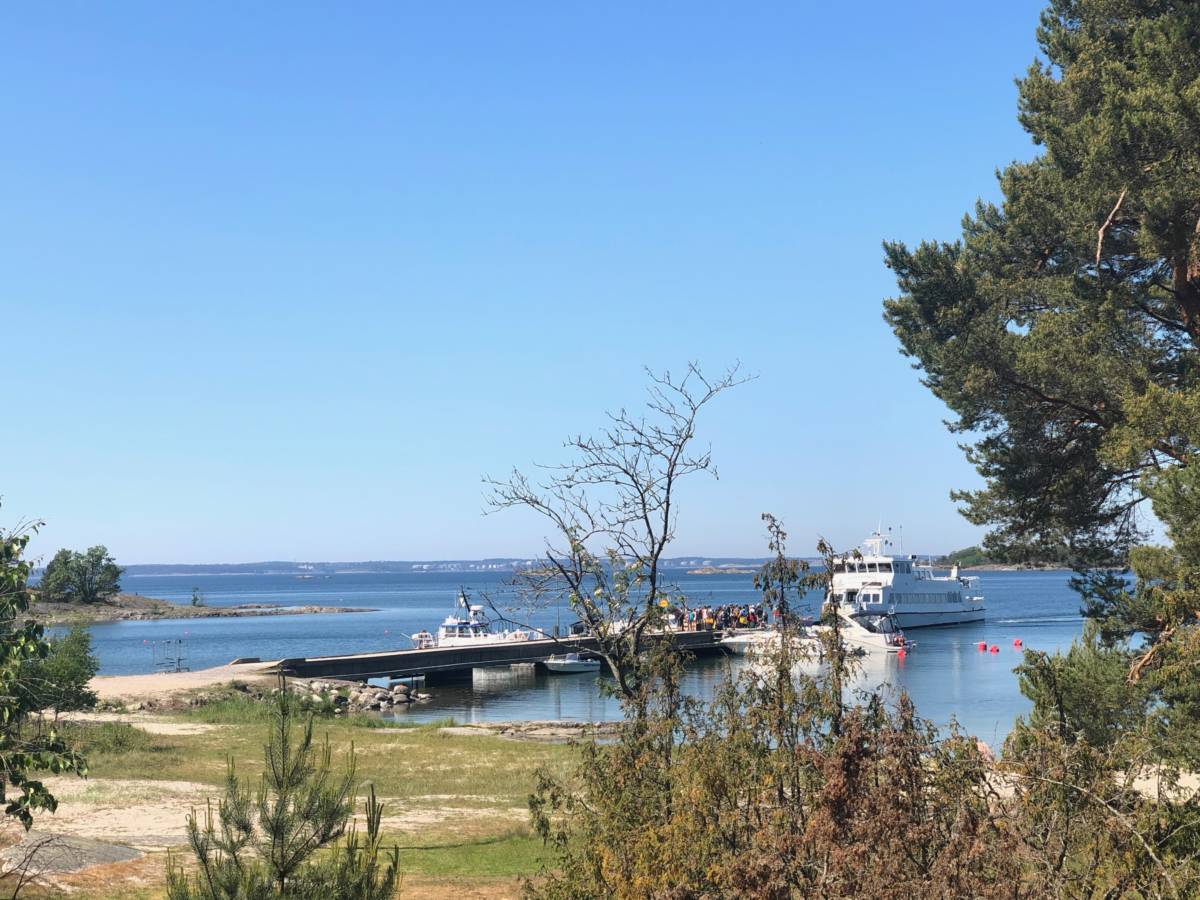 So, yes, we really enjoyed our stay at Nåttarö! And if you decide to go as well, we hope you would enjoy it too!

I vouched to go back there again some day, with a bunch of friends, for a nice barbecue on the beach.

Easter is around the corner. I always start dreaming about traveling to Southern Europe at this time of the year.