You are in Paris!  You have climbed on top of the Eiffel tower or spent the whole day at Musée d’Orsay admiring the impressionists. The birds are singing, the cherry trees and magnolias are blossoming, you are sitting on the banks of the river Seine and contemplating how to best rest your feet in the capital of fashion!  Should you go for a cup of delicious cappuccino or a coupe of champagne in one of the many charming cafes?

Or maybe you just feel a little craving for something extra – some lovely afternoon tea perhaps?

We have you covered! We had our contributor from Paris, Aleksander Parchichev, recommend some of those terrific places!

Nothing is better than having a nice cup of tea with good French pastries after a pleasant but exhausting shopping afternoon, with perhaps an ami adore´,with your mom or even, why not, alone! Here’s the list of the most visited and internationally appreciated tearoom establishments in Paris:

Ladurée is an absolute MUST when you are in Paris! During the years this historical tearoom has become an international institution because of its macaroons and not only!  Apart from the classic millefeuilles, you can also get a “Saint-Honoré” pastry. The pistachio Saint-Honore is a cream puff pastry with light pistachio custard cream and whipped cream. Or grab a “Paris-Brest” – a coconut puff pastry with strawberry jam, coconut Chantilly cream, and strawberries. Mums mums!

Not many of you ladies know that Ladurée was the first tea room for Parisian women because back in the days – early 1800s, women were not allowed in bars!

So, the Ladurée founder, Louis-Ernest Ladurée helped them to finally socialize outside of the home. Apart from being known as a good pastry chef, he was also known as a writer and a social reformist. 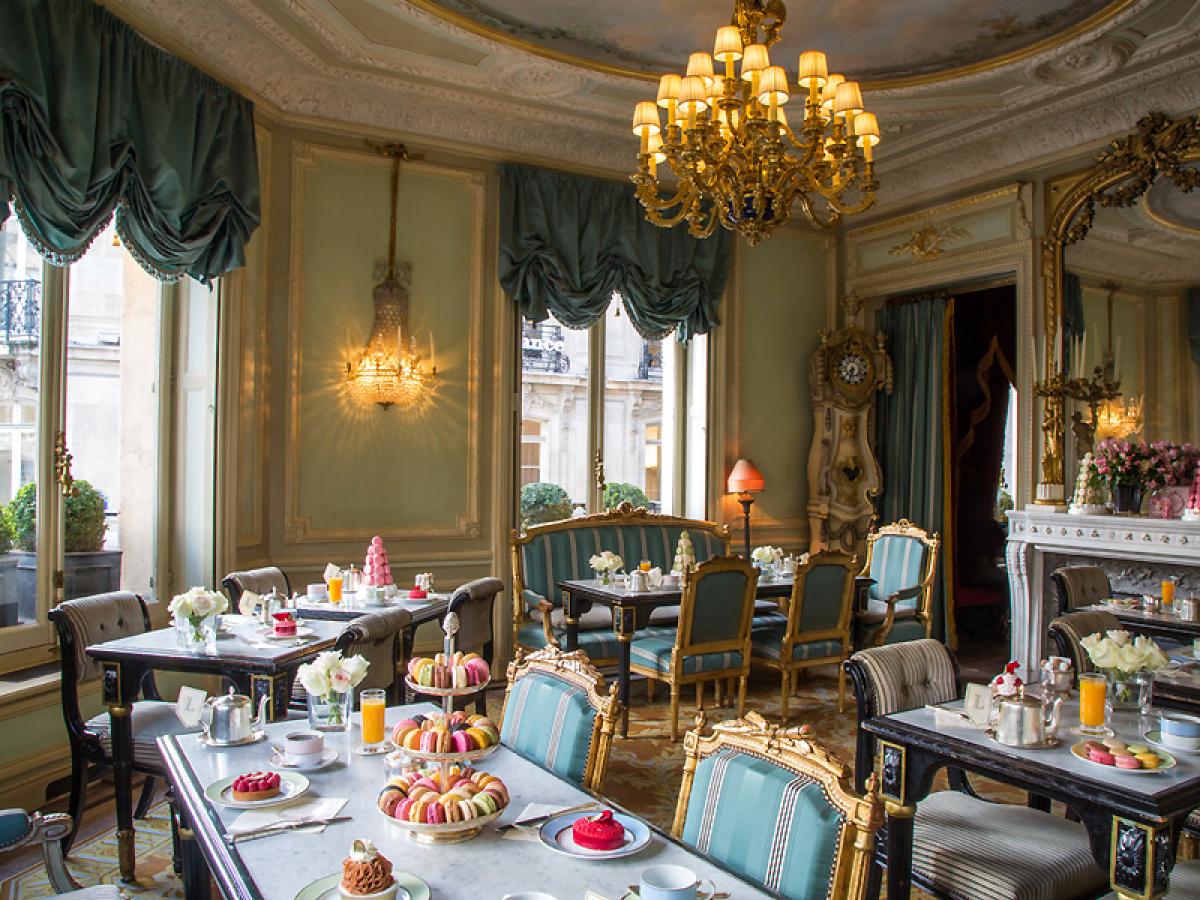 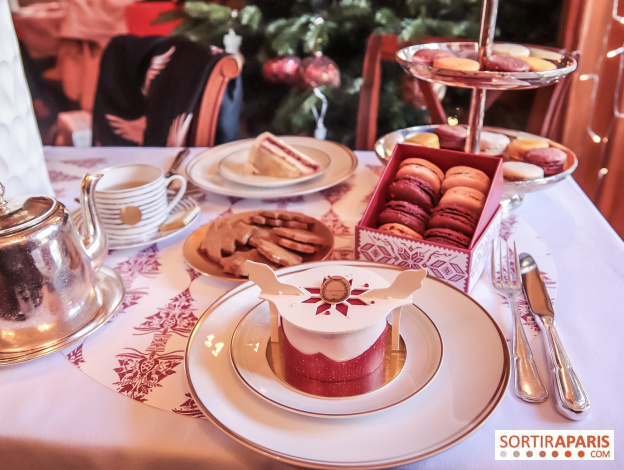 Angelina remains always in style! The tearoom is constantly among the top four of the most visited places in Paris – in front of Les Jardins des Tuilleries, at a walking distance from Musée du Louvre, Place de la Concorde and Place Vendome.

The tearoom was created in the beginning of the 19th century by the Austrian pasties chef Antoine Rumpelmayer, who named the place “Angelina” in honor of his daughter-in-law.

The style of the tearoom is entirely belle-époque,  the waitresses are wearing a typical “French maid” uniform, carrying big silver trays. Sometimes you can just choose from the tray the pasties that you want.

Right after its creation, Angelina became a very popular high society place. Coco Chanel and Marcel Proust have often been spotted there. The place is also voted as one of the top 10 places to have a great breakfast in Paris! 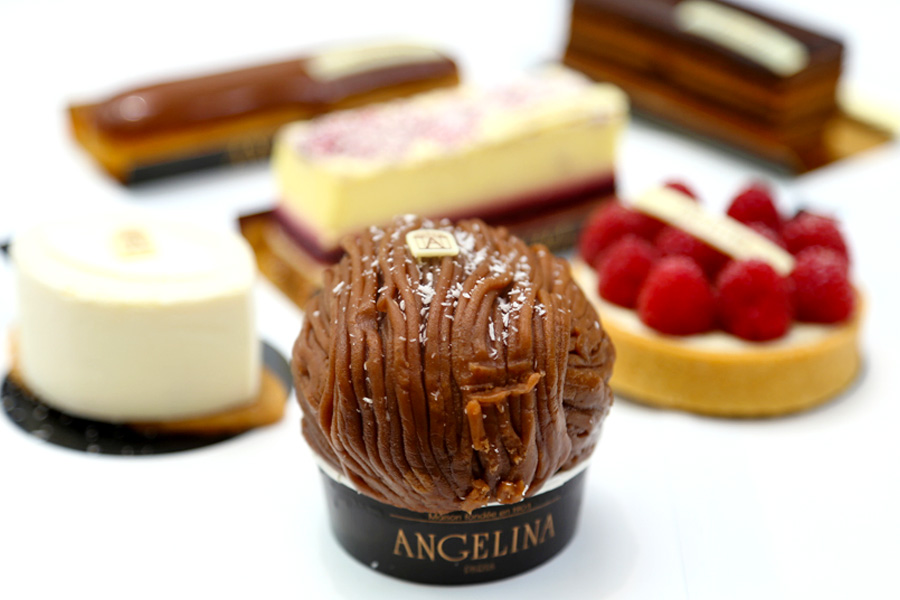 Our next exploration stop is not taking us to the far Saint-Petersburg In Russia – the birth city of one of the most popular Russian poets of all time, but just to the 8th arrondissement of Paris.

Its creation starts from a…song!  A love song named “Nathalie” performed by Gilbert Bécaud. In one of the song lines, the singer mentions the famous café in Moscow.

The very same song inspired Andrey Dellos to open his very high-end gastronomic restaurant in Moscow and, recently, in Paris too. It is no wonder that the place has been called Le Grand Café Pouchkine because of its surface of 600 sq.m! You can get a tasty Medovic, Pavlova-Mont Blanc, some of their small stuffed pastries  – “Pouchkinettes” or even a lunch/dinner menu. The Medovic, for example, is made of buckwheat biscuit, sgushenka cream (sweet condensed milk) and smetana-based cream (Russian sour-cream with a strong flavour). 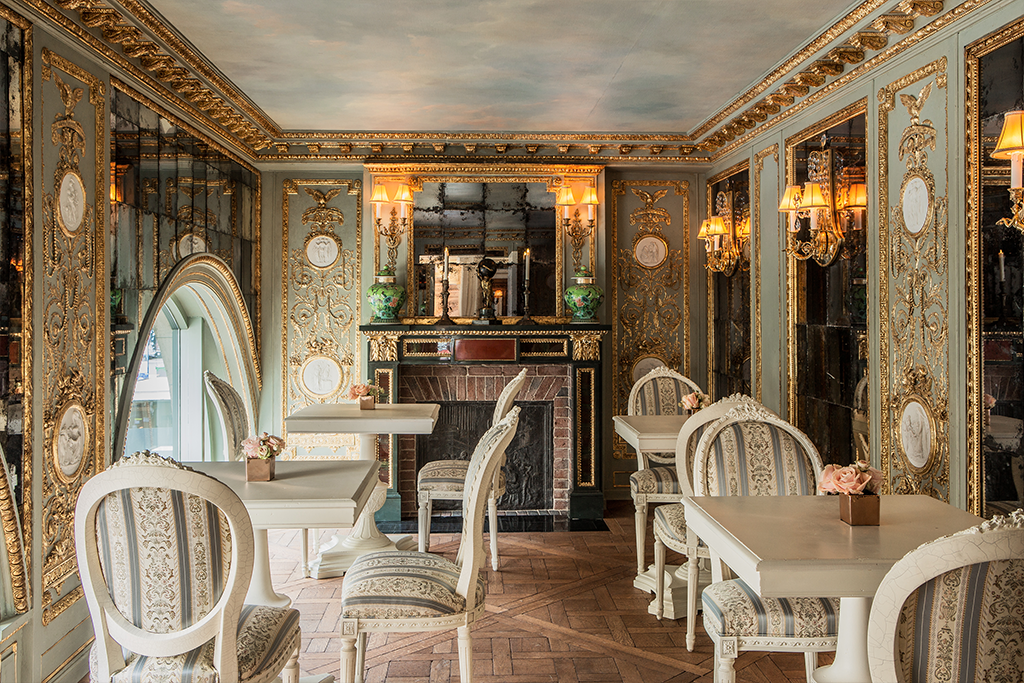 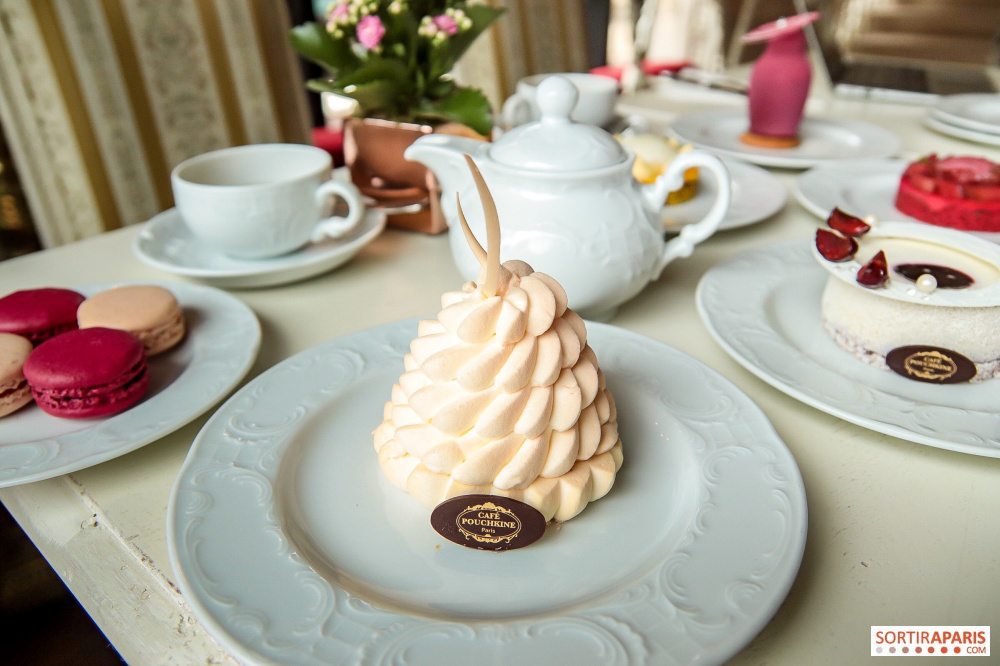 Our next step is taking us right into the tea lovers paradise. The two brothers Mariage and their families have been the most prestigious tea importers for over two centuries.

Practicing the French Art of Tea – the shop is actually one of the best places for a fabulous tea selection to purchase for yourself or to offer as a gift to a friend.

The trademark of Mariage Freres is making pastries and gastronomic dishes. The dishes here are especially composed on a  tea base and unlike most of the other places that we have already mentioned, they are not proposing wines or any alcohol in their menus. Their menu suggests over 650 different types of tea, collected from 36 different countries, including white, black, green, yellow, blue and perfumed teas. The salon has five different locations in Paris, we normally enjoy the one at Le Marais. 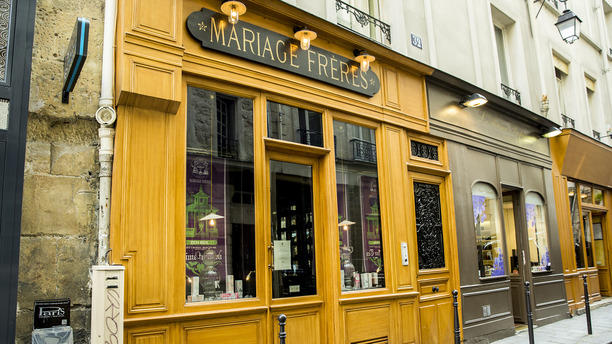 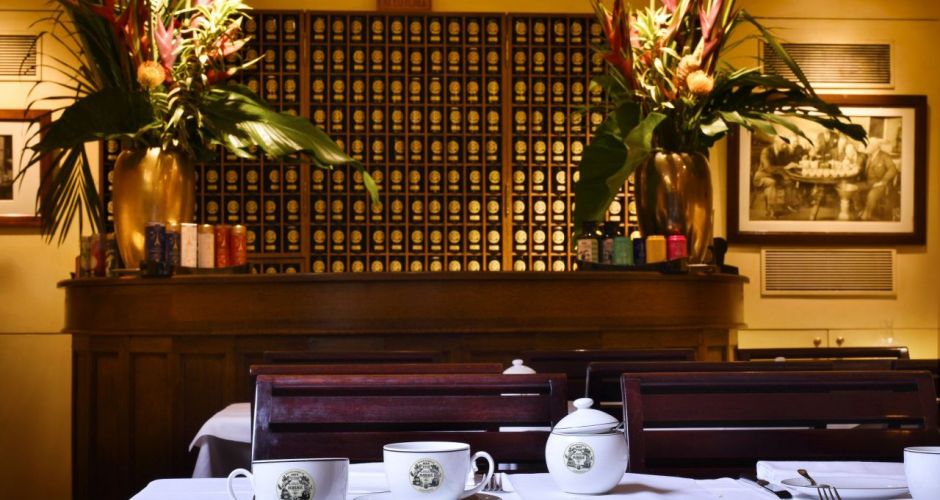 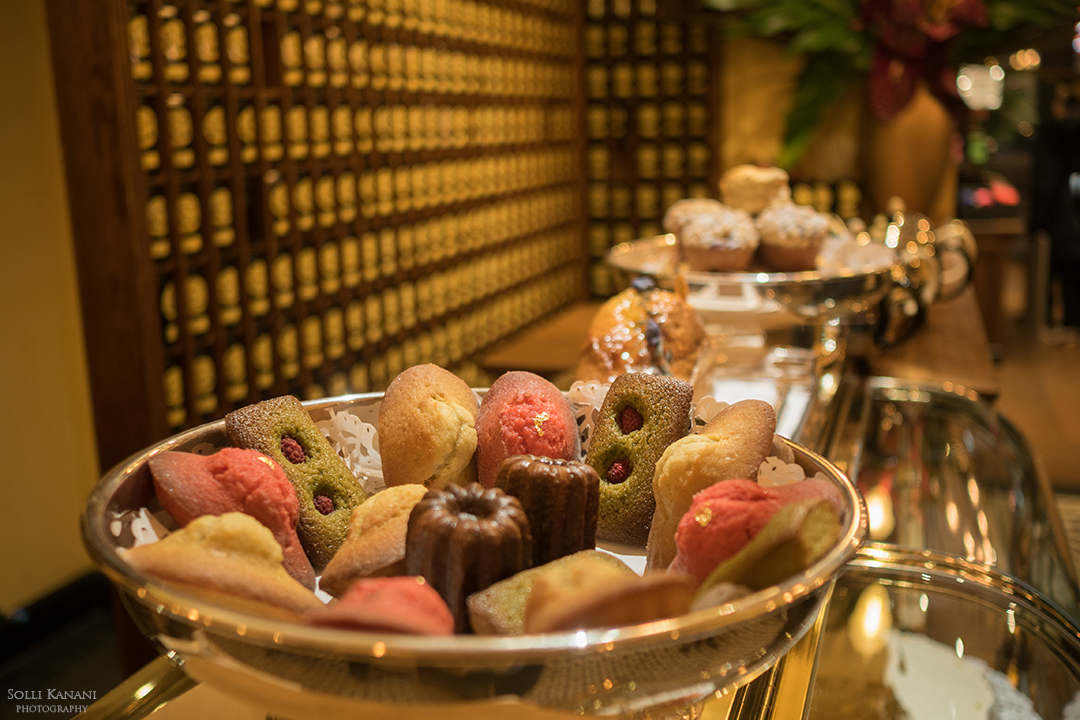 Take a long dive in the deep passion of tastes, history and love of reading! A perfect place in the heart of Paris for book and tea lovers, the English bookshop WH Smith and Twinnings tearoom welcomes you for a nice hot cup of tea and typical English breakfast or brunches. It also offers a numerous selection of cakes and traditional lunches. Choose among a rich selection of numerous blends of teas, starting with their classics such as Darjeeling, Earl Grey, English Breakfast and other less known selections. With a view over Tuilleries gardens and a capacity of seating up to 150 people, WH Smith shows that it sits above France’s largest English bookshop!

When WHSmith opened in 1987, many celebrities and intellectuals  such as Marlène Dietrich, Jane Birkin, Isabelle Adjani, Woody Allen, Claude Sarraute, Louis Ferdinand, came to enjoy a cup of tea far from the Paris hustle and bustle.

The place closed down for 30 years and the reopened version now is quite modern, compared to the rest of the places on our list!

Image: Do It in Paris 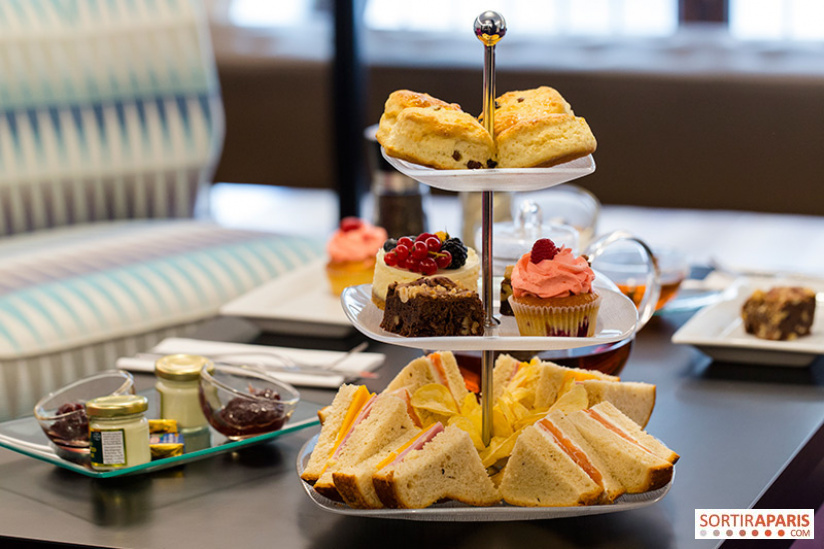 So, did you find out your personal preference toward refinement and subtlety? We hope it was helpful for you to discover the discreet charm of the Parisians tearooms for a sweet and delicious stop between your shopping sprees! Do follow us on Facebook and Instagram for more wonderful updates from around the world!

I met Jin Kuramoto two years ago at Stockholm Design Week. We met at a party and talked, and I